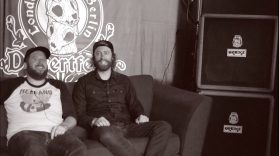 Richard: I’m Richard, I play bass in Chron Goblin. And this is our second time at Desertfest but we don’t really remember much of the first time…

Darty: We have an amazing scene in Canada but it’s just amazing to come over here and just see people that are into our music. We live so far away from home and everyone is so grateful and so nice to us, and we are so grateful to be here. Fuck we love love Desertfest!

Darty: So the first time we ever saw Orange amps was when we came to Desertfest 2012 just to watch the festival. Everyone there was using Orange Amps and it sounded amazing! So when we returned to Canada we were dead set on trying out some Orange Amps, right after that I bought my first Rockerverb 100 Head. It’s been Orange ever since.

Richard: Ye same with me. I saw them, I was aware of them but they were so high end that they were a kinda out of my price range for quite a bit and I wasn’t in a band before. So we came to check out some stuff, we had a play through the OBC810 and an AD200, the bass head, it blew me away when we played with it at the Underworld! Like everything was shaking on me it was so awesome! It’s been my pursuit to play through that since, I need to have that again!

Darty: Ye the Stage Manager at the underworld literally made us play it at full volume and it was unheard of. It was crazy! It was awesome!

Richard: It was awesome! ye the Brits like it loud and so do we!

Richard: I use the Orange AD200 Bass head, the tube, and then recently the 15 and the 410 cabs and it’s amazing. I keep my pedals pretty simple so I just have a distortion Boss pedal and then a wah and a tuner and that’s about it and the head does everything else.

Darty: Like Richard says, pretty simple set up. Actually right before I got here I just got the new Orange Rockerverb MKIII with built in attenuator which is unreal because you can really set up in any kind of room with the ability to change the wattage as well. So it’s fantastic! So I run that through just a 412, a Dunlop Crybaby, pretty simple, and just like Richard here, let the Orange Head do the work.

Richard: Oh and recently I got one of those Palmer Pedals that you take the active signal out of the head and it turns it passive so you can DI it after the head, because in Canada most people DI the pedals before it gets to the head. So essentially what you have is a gigantic stage monitor right behind you, which isn’t the worst thing to have but your not really getting any of that tube sound out.

Darty: It’s literally like a dream come true. It’s so awesome we are so grateful! You know we would be using Orange gear regardless of your support and to be able to have the support is amazing. So ye we are very grateful. Orange until death!

Richard: Ye it’s a very rad thing to do. We are picking up Orange gear for the entire tour after this show and without that we would of had to rent the Orange gear. That would of been a decent dent with the exchange rate now. So you know it does unbelievably good things for touring bands. Like Matt Pike has his wall you know and I’m sure that’s great but for us we just get it out there and as long as it sounds rad we are going!

The Future of Rock ‘n’ Roll
Scroll to top