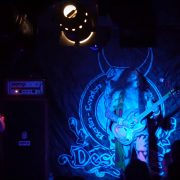 Orange Amplifiers caught up with Linz from Vodun at this years Desertfest in London. We discussed how trying a Tiny Terror in London lead to him using the TH30 and then the Rockerverb. Linz uses a complex guitar amp setup to give him a full band sound from only one guitarist. Using a TH30, Rockerverb and OB1-500 to give him the massive tone Vodun are known for.

Go check out the band on the current tour: