So, let’s take this back to the beginning – how did you first get into playing?
I picked up the guitar when I was 14, and I think my dad’s very much to thank for that. He wasn’t a musician himself, but he was very interested in music, and it was something that was a part of my life from a very young age; him playing various country and classic rock records around the house. I first started playing acoustic, but it only lasted for about a year as I realised electric was more my thing. I was just playing around at home, and signed up to Youtube where I started sharing videos of covers songs I was playing. I didn’t really think much of it besides wanting to share my passion with the world, so the response was pretty overwhelming as I ended up getting millions of views! Back then, it wasn’t many females my age doing that sort of thing, posting classic rock covers, so there seemed to be a market for it and it definitely helped me get where I am today!

Have you always been into writing lyrics or was that something that came naturally once you started making your own music?
That was something that came at a later stage, as I was only interested in the musical aspect of it all to begin with. I was actually playing on my own for about seven or eight years, and it wasn’t until 2011 I finally made it out of my bedroom and into the real world, something I have my other guitarist Mathieu to thank for as he was the one that told me to get in front of some real people instead of just playing in front of my webcam, as music is meant to be shared. We ended up starting the band together and have been writing together ever since. Doing it this way worked for me, but I’d advise other beginners to start a band and play with other people earlier on, as it was definitely a weak point for me for quite some time, as it took me a while to get used to it after doing it on my own for nearly a decade.

You released your second album ‘Burning Bright’ early November, what can you tell us about it?
First of all, it’s definitely a lot darker than my first record ‘Hard Blues Shot’. We recorded it in January after a two year long writing process. We’ve actually been playing some of the songs live for almost a year and a half despite the record being just recently released. As far as the writing and recording process goes, it’s normally myself and Mathieu coming up with a riff, followed by writing the lyrics to go along with it. Once that’s done, we get the other guys, our bassist François and drummer Antonin in and we arrange the rest of it together. Bass, drums and rhythm guitar was all recorded live, before adding lead guitar and vocals.

So, let’s get down to business – what’s your history and experiences with Orange?
My first ever Orange amp was the Dual Terror, simply because of it’s size and it being small enough for me to carry myself. I’ve changed it up a bit throughout the years, but I’ve stuck with Orange as that sorta became my sound.

Can you run us through your rig updates and upgrades?
After a while I ended up wanting a bigger head, and went for a Rockerverb 50. I stuck with this for years, before I recently upgraded to the Rockerverb 100 instead, which I love. My set up depends slightly on the size venue I play, my go-to is four 4×12 cabs and two Rockerverb 100 heads – however, if I’m playing a smaller venue I tend to just cut this in half and go for the two cabs and one head. Regardless of the size of the set up, I love the look of the Oranges on stage, and I can’t get enough of that grain! My other guitarist plays Marshall, and I dig that we have such different tones, as I find the two really compliments each other. 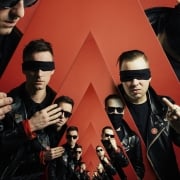 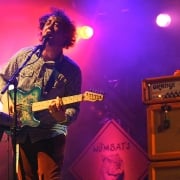 Jamie runs us through Murph from ‘The Wombats’ guitar rig.

Ramble On: My Musical Highlights of 2019
Scroll to top