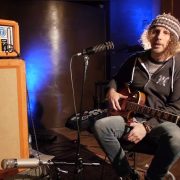 My first experience with Orange amps was with my band Hero Jr, I had been using vintage Marshalls for pretty much my entire career and I didn’t want to take them on the road. So the guys at Orange said try this one and I got the OR50 with the PPC212 cabinet and the minute I took it out of the box and played it, it was awesome. I had a couple of rehearsals with it and then I was on the road and I have been on the road with this amp for 650 shows over the last 5 years. They have been club shows, festival shows, I have used it in the studio, its been thrown around the van, its been across the country a few times and from the time it came out of the box until our last tour that ended yesterday it has been perfect.

I basically use the same settings in the rehearsal room, in small clubs and larger festivals, the only thing I change sometimes is the volume. But other than that this amp is super consistent and stays really true to the tone that I want, at all settings.

Today we are going to be playing direct, I have my pedal board it is on complete true bypass, so I’m just going from the guitar into the amplifier and this is the way the lead pickup sounds.

This amp just responds to the notes, whether I’m playing really hard, I think I have got a pretty heavy touch, most of the time i am really wacking the guitar.

But even for the softer stuff, its just got a really true sound. I would say I would use that setting more than 50-60% of the show. Sometimes for leads I switch to the middle pick up and it gives me the really nasally sound which with this guitar and this amp its really the classic British sound that fell in love with from the first time I heard it.

And it stays really clear when I go down the neck but its not too clean and I really don’t like that “guitar player clean” sound, I really enjoy this amp because it seems to catch my personality which is awesome.

When I use the neck pick up, its for some solos were I just want it to have a little bit balls and almost get it to break up in low end and the great thing about this amp especially when it is paired with this cabinet, this cabinet can take low end and really not break up, its super bad ass for that.

I really find that right there, with this guitar and this amp its a sweet spot.

The great thing about using this all the time is that, whether I’m on an album or playing live it really sounds the same, wherever I go, whatever mics you put in front of it, its super super reliable. So yeh its been on tour with me for 650 shows, no problems, couple of tube changes, everything else is exactly the same setup as when it came out of the box and its pretty rad.

Interview: Aaran McKenzie from While She Sleeps
Scroll to top