Kelby Ray: Hi, I’m Kelby Ray of The Cadillac Three – Proud Orange User. I think Orange Amps – the look, is just so classic. It’s super old school, super Rock N’ Roll and something I always thought just looked so cool. The first time I ever used an Orange Amp was at a festival in Nashville as like a backline situation. I plugged into it and it was so easy to use – not a lot of knobs and it just sounded great. I want something that’s going to work, not too much hustle and fuss and something that’s just Rock N’ Roll. Orange is all those things, so that’s why I’ve always gravitated towards them, they’re something I’ve always loved to play.

My influences are from all over. I used to listen to a lot of 80s country, particularly growing up in Nashville, also learning to play the guitar in high school, things like Jimi Hendrix, Metallica, Pantera – little bit of everything. Blues. Influences from all over the place. Hell, I even liked Mariah Carey when I was a kid. The way my set up works in The Cadillac Three, I’m playing lap steel but I split it and play into a guitar amp and a bass amp at the same time. I’m just looking for something that sounds good mixed together. Right now, I’m using the AD30HTC and AD200 and they sound great working together. It’s a cool sound  that you just can’t emulate anyway else. The Orange sound is just well rounded enough it makes MY sound as part of the band something huge and it really adds a lot of depth to what we’re doing.

Orange Amps are so diverse with many different artists that play them. To be a part of that family is just really a cool thing. I’m getting to do something unique and add my own flair into the musical world through Orange and it’s just super awesome. 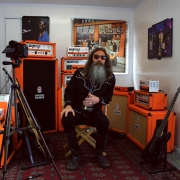 The Voice of Country

How to get the most from your 4 Stroke

The Dark Horses of the Leyton Blues Jam
Scroll to top