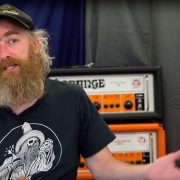 David Sullivan –  Hi I’m David from the band Red Fang and I play guitar. The first time I saw an Orange amp that I can remember, was a band called “Das Damen” sometime in the 90’s and it was in a small club, and they were really loud, sounded amazing. I remember the guitar player reaching back to his amp, I think it was an OR series amp, an older one, and he turned a switch and then it became even more amazing sounding and I didn’t really know much about amps at the time. I mean I was playing amps at the time but it just sounded amazing and the Orange always stuck in my head, and I always remembered the symbols that you guys use for the controls. That was probably the first time in the 90’s, when I saw “Das Damen” and it blew my mind!

What do I look for in terms of an amp? Well I like a nice, you know I want everything to be articulate, so I want to hear everything, the low notes and the high notes all at the same time. I like some beef to it, some “oomph” to it, basically that, articulate but have that growl!

When I first played an Orange it was probably playing a friends Orange, just messing around. But the first Orange I got was the Tiny Terror, the 15 Watt, I love it. Actually on our album “Murder the Mountains” the recordings were done with some different amps but all the overdubs were done with the Tiny Terror. Now I have a Dual Terror, which I love, that’s my main amp I practice on at home. Now I have the CR120, which is the newest amp that I’m playing, I’m used to solid state amps, we have been using the Sunn Beta Leads for years and not that this is the same but it sounds awesome. I know a lot of people are like tubes over solid state, you’ve got to have tubes but I think solid state amps can sound amazing and this definitely sounds amazing.

It just so happened, that our bass player had three or four beta leads and we were all at practice one day and we all said lets see what it sounds like if we all play the same amp. So for Red Fang it’s always been solid state, the solid states are great for traveling as they are rugged, there are no tubes to break but I really like the sound of nice tubes but thats what I love about this, it sounds like a fuckin’ tube amp, it sounds great! I like all kinds of amps, I don’t have to have solid state, I’m not like no tubes at all but I know that a lot of people don’t realise that solid state can sound really good. I feel that there are people who think it can’t be as good as tube amp but it definitely can be.

I like the Orange because it has a nice, little mid bump, it’s just perfect and as I was saying I like it to be articulate, so I like a little extra mids. Well to be honest I don’t have much experience with different cabs, so when I got the Oranges, it was like “there it is”. They sound great, really nice and they are rugged. Oranges has been great to us, Orange is like legendary, especially in like our, I don’t want to put a label on us but in the stoner rock, doom. I consider us hard rock but its great to be representing Orange!

Orange Amplification Partner With Firestone’s Battle of the Bands!
Scroll to top