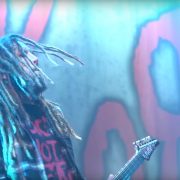 “Hey, whats up, this Brian ‘Head’ Welch from Korn and I’m with Orange.

The first time I saw Orange was in a recording studio, sometime in the 90’s, that’s when we started mixing the Orange tone into other amps for albums on certain songs. There has always been an Orange amp in every studio that we have recorded in for the last 23 years, every producer respects them. I know a lot of guys out there using them, like Jim Root from Slipknot, I love it as he is like plug in and that is Slipknots tone, pretty cool.

I’m using the Rockerverb on the road, as for now I’m using it for my clean channel because it just has what I call “buttery” clean sound, like drops of water. I use effects with it, this song “falling away from me” is really melodic and needs to sound like, watery and the Orange amp got me that tone amazingly. I’m also messing around with my dirty tone, I haven’t got that far yet but I think a lot of cool things are to come with the Rockerverb.

Just to be added to the roster of incredible musicians, the legends really of music. Being on the Orange amps roster is an honour, what history, its amazing to have history like that in a company and I’m honoured to be on board.”