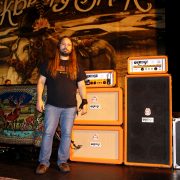 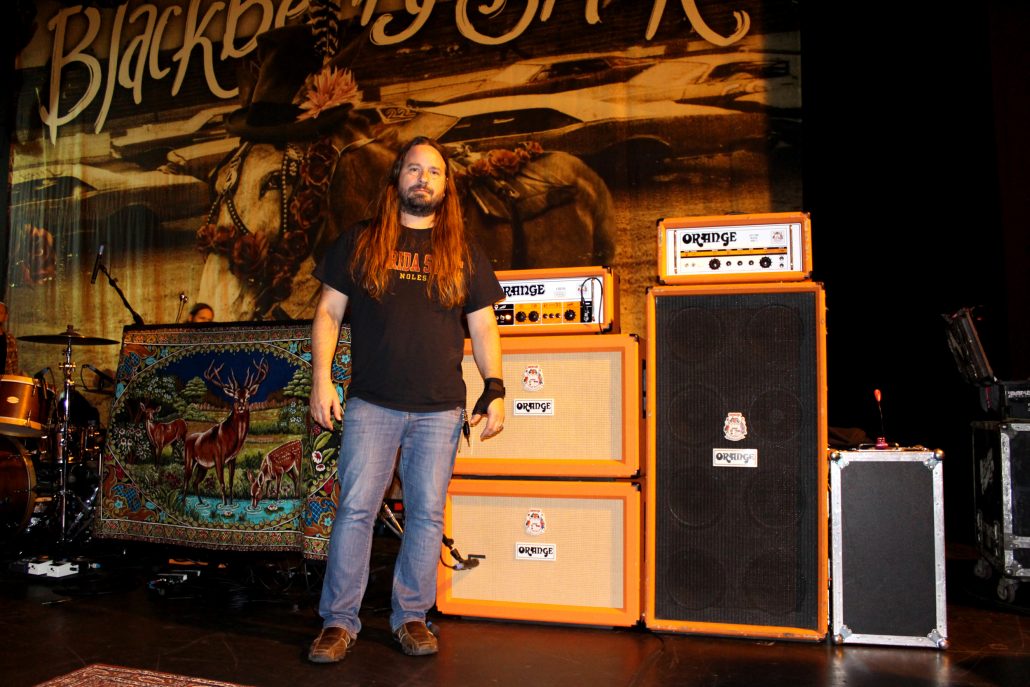 How did you end up using Orange?
When we started out I was using Marshall, which I did for five or six years. They’re big amps and it was a bit of a hassle getting them around, so I ended up trying a Rockverb 50, and I was like ‘That’s it, this sounds amazing!’ A year later they both got stolen out of our trailer, and we went and got three more so we’d have one for back up. After that we used them for about three more years, before deciding to experiment with a few different brands. After about a year of doing that and not really finding anything I liked as much, I went back to Orange.

What’s your current set-up then?
Over here in the UK, I’m playing the OR50 head with two 2×12 cabs, and it sounds monstrous! Back home I was using the Custom Shop 50 with two open back cabinets. The ones over here are closed, and I’m kind of digging them, you know? The OR50 and the Custom Shop 50 both sounds good, and I almost feel like I’m cheating on one of them. I haven’t tried the Custom Shop 50 through the closed back cabs yet, so maybe I should give that a try.

How about when you’re recording?
We recorded with Brendan O’Brien, and he’s got so much vintage gear and old amps, so we would use a bit of whatever he had around. You don’t need the same massive wall on sound in a studio as on stage, and often a smaller amp might sound amazing in a studio. We used a lot of different things instead of just sticking to one. On the ‘Little Piece of Dixie’ record I used Orange the whole time.

I’ve noticed there’s been a bit of a wait between all of your albums, with five years between the two first ones, is there any hope of new music from you guys before 2018?
The reason it’s been such a long wait between the records is because we’re always on the road. When recording an album we don’t spend more than a week in the studio, we know what we’re going to do, so we just go in and get the job done. After that Charlie and I will go somewhere else and lay down the vocals. But to answer your question, it shouldn’t be that much of a wait before the next one, this one’s only been out a year and they’re already talking about recording again. Charlie’s already got quite a few tunes written, and we’re all looking forward to it.

All of your albums have been released on four different labels, do you think you’ve ‘found the one’ now?
Here in the UK, Earache records are unbelievable. They don’t have an office in the States, but if they did I wouldn’t go anywhere else. We’re so happy to have them over here, we love everybody there and they’re all so nice and fun to be around. In the US we’ve been hopping a bit around as record labels just change so much. We haven’t landed any major record deal yet, but we don’t really worry about that. We’re at that point in our career where if we want to give out an album, we can.

You keep getting compared to Lynyrd Skynyrd, is that something you get a bit sick of, or do you just take it as a massive compliment?
When we started this band I’d never expect that, we just got together and started playing, and people would just associate us with Lynyrd Skynyrd, which is awesome. At first I thought it was unbelievable, as I honestly don’t think we sound anything like them, they’re in a league of their own. It still blows me away when people compare us to them, and I feel honoured.

You’re also known to cover some heavier rock bands like Black Sabbath and Led Zeppelin how did that come about?
All of us are kind of metal heads in a way. But then Charlie’s also introduced me to so much music I’d never really listened to, like bluegrass. It’s crazy that when you listen to metal you hear all these guitar players that are just blazing, and I was always like “this is amazing, these guys are killing it!”, and then Charlie started playing me some bluegrass, just a guy with a tiny mandolin, and it was just unbelievable. It’s got a totally different feel to it, but it’ll blow your mind watching a bluegrass player play. But yeah, back to the rock thing. We all listen to it, but I tend to be a little bit more outspoken about it I guess, which has kind of labelled me as the ‘metal head’ of the band.

To me you almost seem like a crossover band, where people that wouldn’t necessarily listen to southern rock, will still listen to Blackberry Smoke, I guess the fact that you’re influenced by so many different genres might be one of the reasons for that?
Yeah definitely! Truth be told though, it was actually Charlie’s idea of covering Sabbath, but we were all really into it, and we do all listen to all kinds of music. I grew up listening to bands like Megadeath and Maiden, the latter which I have yet to see live. I snuck in to one of their shows when I was younger, but didn’t get to see the whole thing. 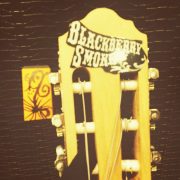 Are You Cut Out For Using An Orange?
Scroll to top