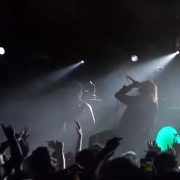 “For me their isn’t a better sound.”

The first time I remember seeing an Orange amp must of been 2009 or 2010 when we really started doing our first tours and stuff. You saw a lot of bass players with either an Ampeg SVT or an Orange head. I noticed the Orange AD200 MKIII which is what I used, I actually moved from the Ampeg SVT to that because I felt for me there isn’t a better sound.

I can’t really have a head that I will do two tours with and then its done with or I have to replace the parts in it. You can tell just by the weight of them, its not to be messed with, its a really heavy piece of equipment. Its got a really nice tone about it and I think it is just really user friendly as well. The master, the gain and then the three tone knobs, you can find your sound really quickly with an Orange head and that is what I like about it.

With it being four valve, usually I don’t really have a lot of me in the monitors, I’ll suck most of the mid out and I pair it out with my pedal board. I usually go with not a lot of mid, treble round about 10 o’clock and the bass around about the same 10 oclock to 12 oclock. You have got to be careful because with the guitar tones that Sean and Matt have, it is quite attacky and its got a lot of gain to it. The amp is quite versatile and you can have a lot of attack on it or a rounded off sound as well, so I think you can achieve what you want.

Its extremely nice and I feel honoured to be part of such a roster with amazing people on it. I just see myself as a guy from Sheffield, when you’re in a band and you are climbing the ladder of success you keep in your own bubble. Its very hard to get an outsiders perspective, in my eyes we are still this band who are still coming out of Sheffield but its nice to recognised on the same level as those people.