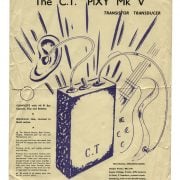 “ I named it the CTI Pixy Mk V…. there weren’t any earlier ones but I figured Mk V was a good starting point. ”

In 1966 I built my original studio on the first floor of a commercial building I had rented in Amity Road, Stratford, East London. Neighbours soon started to complain about the noise, so I had the idea of making a miniature transistor guitar amp and fitting it with an earpiece.

CTI stood for ‘Cooper Technical Industries’. About a year later, other companies were bringing out similar products which could be used with headphones.

I made the Pixy amplifier on a tag board and I found that this worked very well. The earpiece was a crystal design made by ACOS and the amp itself was powered by a 9-volt battery which fitted into the base of the unit. For the case I rolled thin aluminium using a metal forme, and covered it in black vinyl. The circuitry fitted into this case. I named it the CTI Pixy Mk V… there weren’t any earlier ones but I figured Mk V was a good starting point.

I remember going to the Melody Maker offices, where I met two journalists – Chris Hayes and Chris Welch. I showed them the Mk V and asked if they could give me a write-up in their weekly music paper. They told me that they couldn’t personally help me, but put me in touch with the advertising department, who then quoted me what I considered to be a small fortune for a half-page advertisement. Needless to say, I decided to economise and take a small square space advert instead. I was really surprised when, within a month, I had sold about a hundred for just under £2 each.