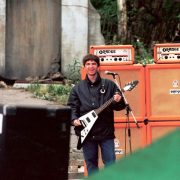 I have been asked to write a article about an album that has been a part of Orange’s history and ever since then I have been wracking my brains about the band to choose. Then I had an idea! Why don’t I write about one of the bands that propelled Orange into the 21st century with a bang! The band that came straight to mind was Oasis.

Oasis were formed in Manchester in 1991,consisting of two brothers Liam and Noel Gallagher. The band broke into the mainstream in the mid 90’s, with at the time the fastest-selling debut album ‘Definitely Maybe.’

The band followed this success by choosing Rockfield Studios in Monmouth, Wales to record their second album in March of 1995. Critics struggled with the bands change to more ballads and huge chorus based songs, this quote from Melody Maker shows some of the issues reviewers had:

“Laboured and lazy. On this evidence, Oasis are a limited band. They sound knackered.”

Time would show these reviews to be unfair, with first week sales of 347,000 copies and the album selling over 22 million copies at most recent count. The album cemented the band as one of the biggest British bands ever.

To say the recording of the album was a bed of roses would be a lie, but sessions did start off at breakneck pace, with the band averaging recording a song a day. Infighting between Noel and Liam eventually ground the recording to a standstill, but more about that later.

The band enlisted Owen Morris to produce and engineer the album, Noel Gallagher the bands songwriter was also on production duties. Morris had previously recorded and produced The Stranglers and Johnny Marr before working with Oasis on their debut. He was largely credited with giving the first two albums the “huge” sound that shaped the bands early records.

‘Some Might Say’ was the first song recorded for the album, it was tracked in March 1995, the reason Rockfield was chosen, was the size of the studios and its accommodation suited the band better.

The studios were split into two, with the Quadrangle and the Coach house which was a smaller room. When Oasis recorded the album they were using a Neve VR console with flying faders. The live room was on the left of the control room, with drum area directly in front and the main studio on the other side. Two vocal and guitar booths were located at the far end.

The guitar amps were all mic’d the same way with an SM57 and a Neumann U87, Bonehead was using a Marshall amplifier while Noel had a Vox AC30, Marshall Combo, a WEM combo and his trusty Orange Vintage Overdrive OR120 Head (see below).

Noel was using Les Pauls and his Epiphone Casinos, while Bonehead just used an Epiphone Casino. The bass amp was recorded using a mixture of an RE20 and DI to the desk.

After the “Some Might Say” recording session came ‘Roll With It,’ this track was recorded live together as the band were familiar with the song. The band played half a dozen takes of the track but in the end the first take was used for the record.

After this the band reverted to using a vocal and acoustic guitar guide to click before the band then overdubbed their parts, this was a method used by Marc Bolan and T-Rex and helped the band to record the songs they were unfamiliar with.

A Visit to the Pub…

Things were going smoothly with the recording session until a visit to the pub stopped recording in its tracks. The band were starting to track ‘Champagne Supernova’ and Liam was bored as he had recorded his guide vocal. So he decided to go down the pub. After a few hours he came back with about 20 locals from the pub and brought them back to the accomodation at the studio. This lead to an argument between Noel and Liam, which led to Liam battering down Noels door to his bedroom. The response from Noel was to hit Liam with a nearby cricket bat. After 10 days of cool down, the band met back up to finish the record and the whole incident was water under the bridge.

All that was left to do was to record the overdubs for ‘Champagne Supernova’, Noel spent most of the time systematically recording his parts without listening back to them in the control room. This lead to them being recorded very quickly. Then the band enlisted Paul Weller to come in and play the lead part on the song. Paul turned up to the Orinoco Studios in South London with his White Gibson SG and an old Vox AC30 amp and laid down the guitar.

He recorded 4 versions of the guitar and then Noel picked his favourite, the Vox was mic’s up with a 57 and there were no pedals used.

The album became a classic for the band and British music and still is widely regarded as one of the best albums recorded. The band went on to play two huge gigs at Knebworth to a crowd of 250,000 people in total, 2.5 million people applied for tickets.

Noel used Orange amps throughout the late 90’s and until the early 2000’s. As well as the OR120 Head and PPC412 cabinet, Noel suggested changes to the Overdrive. He was using the amp with everything up to 10, Orange’s Technical Director Ade Emsley spoke to him about ways to approve his sound. Oasis were on tour in 1997 with U2 and Noel had been using an Orange combo and he wanted more crunch from them. Ade made some changes to the overdrive circuit, which includded modifications to the phase inverter and preamp. These changes gave the amp more sparkle and also formed the basis for the new OTR amplifier.

Noel continued to use Orange amps until the early 2000’s, Orange even built him a Custom Shop Combo 140 amplifier, with 3 12” Celestion speakers. This amp was sold recently on auction site Reverb and fetched £6,800.

One World, One Voice: Orange
2 replies