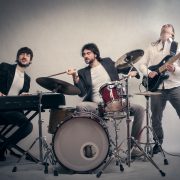 They’re bothered by you barging in when they’re doing something important, and visibly hurried, so you can give them a physical EPK. Giving someone a physical EPK at NAMM is literally the same thing as saying “here, YOU throw this away.”

Most AR reps at NAMM play an essential role in the actual operation of their booth. Personally, I start planning the Orange booth upwards of 6 months in advance of the show. I fly out early to ensure the set-up goes smoothly. I fly out late so I can make certain the booth is broken down properly. During the show I have artist signings, employees, and media interviews to manage. At night I have dinners with retailers and other industry contacts. Some nights I just go back to our rental house and drink away the tears.

Compound all of the above with the fact there are literally hundreds of A-level rock stars all around me at NAMM, and it only makes sense that I’m not going to prioritize cold-call meetings with complete strangers or the “my 9 year old son is going to be the next big thing” dad-managers. I’d rather spend the limited amount of time I have on the floor of my booth talking to actual rock stars. In fact, I’d rather spend that time talking to Joe Blow from Crazy Wacky Guitar Expo in Butthole, Oregon since the end result might at least be a sale (and I’m EXTREMELY removed from sales at this point in my career).

So how do you actually need to approach trying to get an endorsement at NAMM? It’s easy. If you’re an actual rock star, just walk up and say “I’m a huge f*cking Rockstar and I want to play your amps.” I will then say “works for me, bro,” we’ll hug it out, and shortly thereafter you’ll be endorsed. Don’t be hesitant to tell me who the hell you are. It makes everyone’s lives easier because I don’t have time to figure out who you are, you coy bastard.

If you’re not a rock star, then it’s even easier. JUST DON’T ASK ME FOR AN ENDORSEMENT AT NAMM. Simply walk up to me, hand me your contact information, tell me you like Orange and want my information, and then walk… the hell… away.

Now here’s the tricky part. I call it: “The Waiting.” If you send me an email less than a week after NAMM, I’m deleting it. There are hundreds of emails in my inbox post-NAMM. I have no choice but to prioritize artists I’m already dealing with during that time. Make yourself stand out by waiting to email me after NAMM.

When you do finally email me I would suggest something minimal, yet creative, but not something packed with facts and links and embedded images and stories about your dog and attached PDFs and your past medical history and your grandmother’s old-world soup recipes. I really only want the basics.

You can see what I’m talking about on our Ambassador request website. However, and this part I happen to believe is universal among AR reps, DO mention that we met at NAMM. The fact you were at the show does carry some weight. There are a lot of goobers at NAMM, but those goobers still made the effort to find a way into the show. And naturally any goober – myself included – that loves Orange amps is a goober I can get behind.

Every AR rep has to be a brutal, quick-thinking judge at NAMM. Also, we’re all hung-over. For best results, don’t try to get endorsed at NAMM. Just make your presence known, then sit back and endure “The Waiting”.