Our third ‘How I got into playing’ post where we as part of our ‘Learn the Orange Way’ campaign, offer free guitar lessons for all Orange users (more on that here), and share a series of quotes from some of our artists on why how they got into playing.

I first started playing when I was about 3 or 4, and I’ve been playing professionally since I was about 11. I was really inspired by guitar players such as Clapton, Hendrix and Stevie Ray Vaughn from a young age, another early discovery was The Allman Brothers Band, as well as The Marshall Tucker Band and a bunch of other great Southern bands. Later on, I got really intrigued by “the frontman”, and artists such as James Brown, Otis Redding  and Aretha Franklin – anyone who had that certain attitude would really speak to me. What really changed the game for me was when I started studying jazz theory, and discovering Miles Davis and John Coltrane was really life changing to me, a clear game changer.

I heard Led Zeppelin when I was four years old, thanks to my aunt, not that she was aware of it at the time. My grandfather was a jazz guitarist way back when, so while I liked that there was a guitar player in the house, I wanted to play heavy rock from the start. Grew up listening to Zep, Queen, Aerosmith, Kiss. Started learning guitar at age 9 but didn’t take it seriously until I saw Ritchie Blackmore on MTV smashing his guitar, and seeing videos of Jimi Hendrix lighting his Strat on fire. Both of those moments made me think “I have to play guitar for life!”

I grew up surrounded by music and the people playing it, my grandmother played and my dad played the saxophone. It was something I just naturally gravitated towards from a very young age, and it didn’t go away. I think you either have it in you or you dont, and for me it was just something I stuck with. 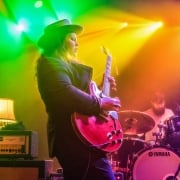 Orange Ambassadors Nominated for the 2021 Grammys 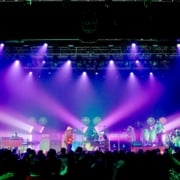