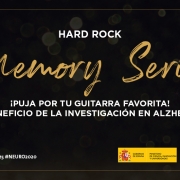 Hard Rock Cafe will get renowned musicians to customize a guitar, in which they will also have to write a memory they do not want to forget. Guitars will be exhibited and auctioned in November coinciding with the 25th Anniversary of Hard Rock Cafe Madrid. Proceeds will be donated entirely to the Alzheimer Center Queen Sofía Foundation.

Bid for this amazing O-Bass at HERE

Proceeds will be donated to the Alzheimer Center QUEEN SOFIA FOUNDATION

The Queen Sofia Foundation’s objectives, included in its Statutes, are the promotion, help and development of the needs, physical as well as spiritual, of all types of men and women, and their fullest integration within the social community, encouraging and defending the citizens’ lawful rights and aspirations, the works of literature, the arts and sciences, the regional and local traditions, Spain’s artistic and cultural heritage, the acquisition of human, technical and professional abilities, the environment and, generally, everything related to the ideas of progress, welfare and justice.

Established to champion Hard Rock’s founding mottos, the Hard Rock Heals Foundation exists to improve lives and the resiliency of communities through the power of music. Hard Rock Heals Foundation seeks to build and invest in programs and partnerships that contribute positively to people, communities, and the natural environment. Since 1971, Hard Rock International has continued to bring people together through the unifying effects music. Relationships with artists ranging from emerging to iconic in support of charitable efforts around the world.

We believe the music improves lives, 100% of revenue raised by our Hard Rock Heals Foundation and its programs is donated back to the communities in which our Hard Rockers live and work! Check back often to learn more about our ongoing philanthropy and how you can get involved.