When you’re shopping for new gear, the go-to tool for gaining knowledge these days is the internet. Either forums, or YouTube videos, or Facebook pages; basically the internet has democratised information in such a way that whatever you’re into, you can find other people with the same interests and build up a picture in your head about a potential purchase before you ever even see (or hear) it in the flesh.
In ye olde pre-internet days, this process was often done via trusted magazines, or word of mouth, or by seeing the item for yourself. Sometimes, you just and to take the plunge and buy the item, and let your opinions form after using it for while.
There are pros and cons to both approaches; sure, it’s nice to use internet research to get you in the right ballpark of what you’re looking for, but sometimes you just can’t beat a bit of first-hand experience.
See, the problem with desk research is that you’re not always getting an unbiased opinion. If someone shells out a stack of money on an amp, for example, then they’re going to be biased towards saying it sounds like the greatest thing they’ve ever heard. There’s no objectivity here. Partly through self-preservation, you’re bound to think your new expensive gizmo is going to be brilliant because you don’t want to countenance the thought that actually it may not be and you’ve wasted your cash.
So we’re promoting a stance of trying things for yourself. Let your own ears be the judge. A compressed YouTube video might give you a flavour of what our amps sound like, but sometimes you just have to experience it. Here’s five things which you’ll need to see or hear for yourself about our gear.

Clean channel
It would be too simplistic to simple say ‘tone’ when talking about things you’ll notice. Every amp has a tone, good or bad, and trying to communicate that through words is difficult. One man’s thrash tone is another man’s razor wire, after all. But it stands to reason that most amps will have a spectrum of sounds, running from clean to dirty.
Looking at an Orange clean tone, you’ll notice a couple of things. ‘Old’ Orange, you may have heard, was famously wooly and mid-rangey. This is why it was so heavily favoured by blues-flavoured artists like Peter Green. He loved the way a riff could be driven through the amp’s clean channel to give it extra bite which was different to what was available at the time.
‘Modern’ Orange is slightly different. The clean tones on certain models, like the Thunder series, are ultra-chimey and replicate your guitar’s natural sound amazingly. From here you can hear the difference between different pickups, woods and playing styles. At low to mid volumes they also offer a virtually distortion-free palette with plenty of headroom, through which pedals excel.
Push the clean volume on, for example, the Rocker series and you start to introduce subtle, harmonic distortion which, in combination with you guitar’s neck pickup, will straight-up make your knees wobble and the hairs on your neck stand up.

As mentioned previously, there is an entire gamut of tones you can coax from an Orange. Looking at the other extreme to clean, you should really hear for yourself what a full-throttle Orange sounds like in person. On recordings, you’re getting the sound as it is once it’s processed and placed alongside other instruments. But in person, the Orange dirty channel is a thing to behold.

Using the shape control, you can go across everything from almost muffled Sabbath-esque sludge, through to crunchy lo-fi 80s thrash. On the modern Orange amps, there is literally more gain on offer than you could ever realistically need. Try downtuning and playing some Sunn O)) style drones on a Rockerverb if you don’t believe us. Truly biblical.

What’s more important though, is how it’s a quite unique flavour of gain. Every amp can be pushed, and every amp has the spectrum of tones available, but there’s just something about that Orange gain which you really have to hear for yourself. 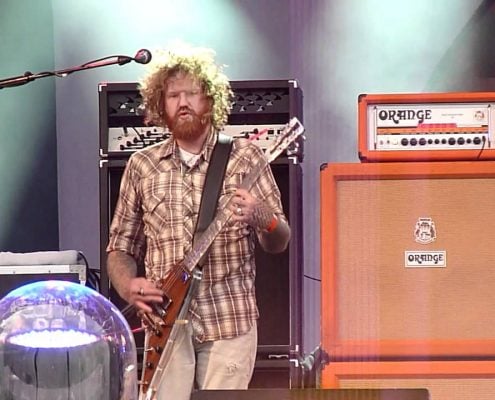 This is linked to the previous two points; the sound you get when you add other instruments into the mix. And again, it’s not rocket science, any amp can compete with a drummer if it has enough power. Any amp can be tweaked to accommodate the low-end of a bass. But the fact that Orange Amps have such a unique sound to them means that changing your current amp to one of ours may end up having a quite profound effect on your band’s sound.

We’re not for a second claiming our valve-driven effects loops to the some kind of space-age, proprietary technology. Let’s be honest, vacuum tubes are pretty archaic. But there is definitely something in the way Ade designs the circuitry on our amps. See, the guy’s a mad scientist. He’s spent decades working on, and building, amps, and he knows how to extract every drop of tonal goodness out of our circuits. So while the PCBs, components and schematics might tell one story, one listen with your own ears may tell you something entirely different. 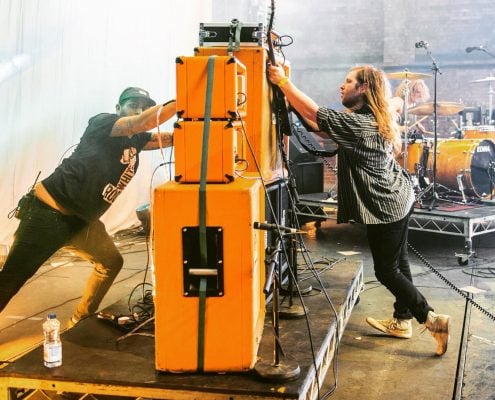 The final point is a bit superficial, but it’s definitely ‘a thing’. While there was a time when watching a show meant backlines containing lots of black boxes on top of black speaker cabinets, now there’s a definite shift. Festival backlines, in particular, have become awash with Orange amplification, which tells you how respected our gear is.

But choosing to use an Orange amp doesn’t just give you access to amazing, unique sounds. It also marks you out as someone who knows their gear. As someone who obviously knows what good tone is. And as someone who is proud of the fact that their amp isn’t a boring black box.

I guess the point is that you can research your next amp as much as you want. We get why you’d do it; new amps aren’t cheap, and they have to offer you the sounds that you need for your particular circumstances. What we’re saying is that before you buy anything, go and play through an Orange first. You never know, you might like it.