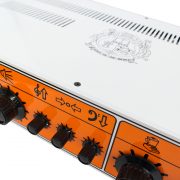 Bass overdrive: A one way ticket to Asgard (Land of the Gods)

Lately overdriven bass has had a bit of a comeback, waking like the giants of Jotunheim from their icy slumber. Modern players, warmed to the tone of 1970’s dirt amps are seeking out flexibility from their instruments and the answer to their prayers is overdrive.

It’s a tone that is both classic and contemporary, a part of an arsenal of weaponry that can conquer lands we thought were out of reach.

Why the fascination with bass overdrive?

Bassists have sat back watching as their six-stringed friends rip it up while they happily provide the backbone to songs for a long time. Consider some of the greats: John Paul Jones of Led Zeppelin, Jack Bruce (Cream) and Iron Maiden’s Steve Harris, they all provide the most solid foundation you can ask for. But a new breed of player is on the march, notably Prophets of Rage’s Tim Commerford and Mike Kerr of Royal Blood, who fires off a searing attack of tonality, the lows and highs, removing the need for our 6 string relatives. No longer is this about keeping peace in our own world, it’s about taking Valhalla, claiming the seat from Odin and making all nine worlds our own.

Bi-amping your way to bass overdrive of the gods

Mike Kerr gets that awesome tone by splitting his signal two ways. One side is channelled and modulated to drive a guitar amp and the other goes into a bass rig. That means he gets that top end aggression from his bass overdrive pedal and pulsating bottom end too. It’s like he’s ripping down the gates to Valhalla and then wiping his brow with the draft excluder.

But it’s not quite as simple as storming the rainbow bridge and claiming the hall of the slain. Achieving that kind of monstrous tone has been all about using a mighty rig with two separate amplifiers and speaker arrangements. So unless you’ve got a strong back and deep pockets, bi-amping can feel out of reach to those waiting in the sidelines for their time to come. Unless that is you’ve got a trickster god on your side.

Getaway Driver is the perfect tool to swipe away Odin’s throne, giving bassist two tones in one. This one small, inexpensive unit produces vintage vibe gain that has a real smooth compression overdrive sound that feels responsive like you’d gain from a Class A amp. For bass guitarists, this is the ideal tool to push forward driven bass riffs to cut through the drums. It’s like having a cranked modded ‘70s amp under your foot. If you want more raw power, using the 12 Volt input gives you a bigger, punchy sound of the EL34 tube. By contrast, use a 9 Volt battery and you’ll get a less bassy tone similar to the EL84 tube that is upper-mid focused.
But the linchpin to this bass overdrive pedal is the cab sim feature that gives you two outputs. The first output is transparent when bypassed, but once you engage the pedal you’ll get powering bass overdrive only the god of thunder could deliver. The second output offers a glacial clean amp sim channel that glimmers with harmonic overtones. Hook the second channel up to a DI box and you’ve got yourself a bi-amp. 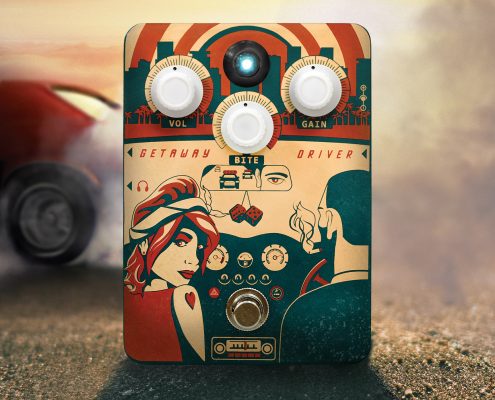 Just like the sound of any good armour as your charge into battle against the gods of Asgard, there’s a good chance that you’ll want more clank with your bass overdrive pedal. Orange’s Two Stroke EQ pedal gives you just that. By plugging the first channel output of the Getaway Driver into the bass EQ pedal you can carve your own unique tone, digging your ice sword into Yggdrasil, the tree of life like a Swiss army knife. As you watch its bark fall to the earthy meadow, regale in your victory as you revoice the tone of your instrument. Add more aggression across a band between 120Hz to 1.2KHz parametric or cut some of the wooliness between 850Hz to 8.5KHz, the 12dB boost gives you total control. 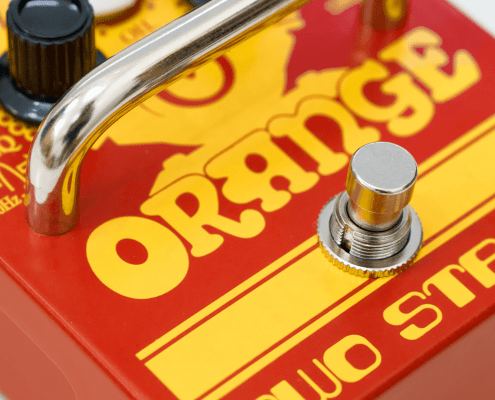 In combination, the Getaway Driver overdrive pedal and Two Stroke EQ pedal seem like chalk and cheese. Loki and Thor. One unit is pure sorcery, capable of creating two distinct sounds from one unit. The other can shape mountains using the power of modulation, sculpting bass tone from searing attack all the way to subtle depths. Bypass both pedals and enjoy the transparency of high-class circuitry that adds or takes away nothing, just pure tone. Then go into overdrive to the max, riding Odin’s eight-legged horse out of the battlefield waving your flag victorious. 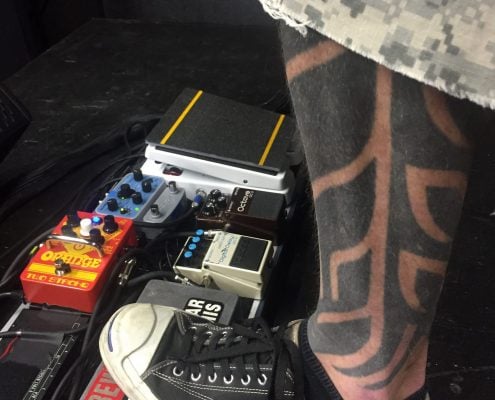 So, there is only one question left to settle.

Now that you’ve conquered the gods, who next?