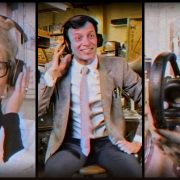 Welcome to our monthly blog post called “Bands We Don’t Endorse But That We Like (we may endorse the band as well)” We may need to change the name!

To be honest, it will probably become bi-monthly over time as we get busy with other stuff. It’s fun to dream though.

Alex Auxier is our International AR Manager. Daniel Darby is our European Artist Rep and Content Creator. Together, along with Neil Mitchell, who has seriously like 5 different jobs including AR, we spend a lot of timing rating and criticizing bands in order to decide which ones will receive endorsements. A lot of those bands are great, but just not in the right place at the right time. This is our opportunity to share some of those bands with other Orange fans. However, we’ll never tell if you if a specific band actually applied for endorsement. That would, quite frankly, be embarrassing.

Well it wouldn’t be an Orange bands list if there wasn’t something resembling psychedelic! “Electric Looneyland” is the second album from Serpent Power the supergroup duo of Ian Skelly (The Coral) and Paul Molloy (The Zutons,The Coral). The best way to describe it is Spooky rock, lots of fuzz, delay, reverb and harmonies. Check out from the new album the spacey “Black Angel Rider” music vid:

Earthless – Gifted By The Wind

Surprise, another Psychedelic band, but when it’s this good, so what! Earthless are a instrumental psychedelic band from San Diego, this is the first single from their new album “Black Heaven” out on March 16th. This is actually one of the few songs were Isaiah from the band sings, the track takes use through wah guitar, heavy drums and thundering bass lines:

London’s “Shame” are being tipped for great things in 2018 and if their recent debut album is any to go by, then we can expect them to get bigger and bigger. Formed in 2014, “Concrete” is taken off debut album “Songs of Praise”, if you like post-punk this is for you.

I endorsed Khemmis the moment I saw them play Psycho Fest in Las Vegas this past August (full set in video below). Even though they haven’t put out an album since 2016, I’m adding them to this list because they quite frankly shred ass.

Hide your asses, folks, because Khemmis is going to shred them.

I can’t exactly pinpoint their genre (because it’s a mixture of at least 4 genres) but Khemmis could definitely be described as stoner-doom Opeth meets Baroness meets Sleep. Every single song is mastered with the intention of blowing out your speakers. Normally that would piss me off but not in their case. I want their tone to envelop my brain. If that means breaking my speakers, then so be it.

A new album is reportedly coming soon from Khemmis. I’m going to build a custom ass-protector in the meantime.

Again, these guys aren’t new, but since they put out an album in 2017 I’m going to justify putting them on my list.

Every single song Rozwell Kid puts out sounds like Rivers Cuomo’s wet dream about the time he got to play lead guitar for KISS at the Meadowlands. They sound like Weezer if Weezer stopped while they were ahead. I wouldn’t be surprised if Rozwell Kid owns a time machine, because they sound like they went back in time and forced 1994 Rick Ocasek to produce their latest album, Precious Art. But at their core they’re definitely just a punk band with an absurd amount of emotional and musical range.

Basically, they sound like my childhood so I like them….a lot.  Just start the album at song 1 and try to stop it before the end.

Here’s a local Atlanta thrash metal band that doesn’t suck. And this is coming from someone who simply doesn’t really like thrash metal (at least not most of the stuff produced in the last 20 years). As a caveat to that last sentence, I do endorse thrash bands. That’s why I said “most of the stuff.”

Death of Kings is just solid though. Their live show is top notch. I watched the whole thing and never once went to the bathroom. That’s basically my new standard as I reach my mid-30’s and usually have the luxury of dipping backstage if a band starts to bore me. If I watch the whole concert, by a band I’ve never seen, then it’s probably because they’ve just become one of my new favorite bands.

Their new album, Kneel Before None, is through the link below. By the way, please don’t email me with a huge list of thrash metal bands.

The History of Orange – The OMEC Digital
Scroll to top