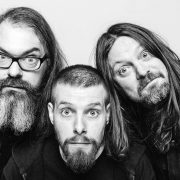 I’m not going to do 3 bands this month. I only care about one band this month. That band is from Norway and they’re called Motorpyscho.

How the hell have I not heard of this band until now? They are one of the most versatile and unique bands I’ve ever listened to. Motorpsycho’s career spans more than 3 decades. They have25 albums and they are set to release another one this year. Every album they release is ahead of its time. Again, how did I not know about them?

In the early 90’s Motorpsycho’s sound was almost hardcore. Their 1993 album Demon Box could be mistaken for something released by Quicksand (the best example being the track “Nothing To Say”).

But when 1996 rolled around they released Blissard and that’s really where they take off for me. Blissard is 90’s rock at its finest. It sounds like it could have been put out by North Carolina’s esteemed Merge Records. I’ve played it at least 10 times this month alone and it has quickly skyrocketed into my Top 20 albums of all time. While I love the preceding album Timothy’s Monster – after all it does a great job of transitioning the band from hardcore into what could be considered indie rock – it isn’t as solid a work in my opinion.

Something interesting happens as Motorpsycho nears the late 90’s: they become more hard rock, psych-rock, and even metal in some cases. Then there’s Roadwork Vol 2: The MotorSource Massacre. At this point they start to get experimental, bringing in elements from jazz and world music.

But what I love about Motorpsycho the most is that they never seemed resolve to a single genre. In 2000 they released Let Them Eat Cake. After several albums that made it seem like they were going to “start getting weird,” they put out this album and just completely reset our assumptions. Let Them Eat Cake has elements of The Beatles, Beulah, early Brit rock, and about 10 other hands that won’t even come out for another decade.

From 2000s Let Them Eat Cake until 2002’s It’s A Love Cult they release 4 albums. These albums, while not entirely similar, do share a lot of the same ideas. The band almost seems grounded during this period. But all of that changes when Motorpsycho puts of The Tussler in 2003, which is a freaking 21 song country record. Also it’s freaking awesome. How the hell a rock band from Norway put out a Nashville-worthy country album is beyond my understanding, but they did it and they did it the right way.

I’ve listened to a couple albums past The Tussler and the band seems to vear back towards indie-rock for a second, and then suddenly makes a big jump into straight-up psych-rock/desert-rock. 2010’s Heavy Metal Fruit is the start of that transition. I’ll be listening to more of their stuff from the last decade in the coming weeks. All I can say is, I’m looking forward to it with extreme excitement. Motorpsycho is one of the best bands I’d never heard of until a month ago. I hope you will take the time to explore this genre-bending band that has no plans of quitting anytime soon!

Superorganism – Something For Your M.I.N.D

Superorganism are an eight member indie pop band, their debut album came out last month and they can be best described as a mixture between The Flaming Lips and MGMT. “Something for your M.I.N.D.” is the band’s first single and perfectly sums up the band’s dreamy, synth pop music.

The Shacks are from New York and are signed to Big Crown Records, their debut album dropped this month and is full of dreamy, chilled out psychedelic music. “Follow Me” is the band at their best, with a wall of sound production and beautifully simplistic vocals.

Haggard Cat is the new band from Matt and Tom of HECK fame, they have returned with this ace song “Bone Shacker”. Also the video is amazing, you have to watch it, it looks like it was a lot of fun to create! Back to the music, this single has scuzzy guitars and cowbell, like what else do you need!