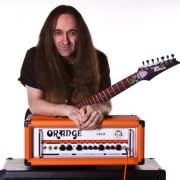 I first became aware of the Orange brand way back when Black Sabbath played on The Beat Club, a German TV show. (Remember when videos were played?) In the 80s, it was all about the wall of Marshalls ala Judas Priest/Iron Maiden/Metallica. Of course, being a zit-faced pre-teen, that was the most amazing thing to see. But what was this Orange?! Why weren’t metal bands using them?

I honestly was not familiar with the Orange brand as it was not really in people’s faces. But the first time I saw an Orange amp in MY face was when I worked in music retail. Another employee brought his amp head for me to listen to, and I remember it being SUPER loud, louder than any Marshall I ever heard. I think he had a Rockerverb 100 MKI. (Sorry but my aging brain can’t remember what I had for breakfast just now…) My attitude at the time was “Yeah it’s louder than hell but…” and that was it. I was more into amps that had super high gain. I felt I had to be “brutal”. Boy was I wrong!

Many years later, around Memorial Day weekend in 2013, my daughter was trying to learn guitar and asked to try out a pink Ibanez. She saw the pile of Orange amps and said “I want to try THAT one,” which was a Rockerverb 50 (that I do remember!) She hit the low E string and I exclaimed “Gimme that guitar!” This was not a brutal metal amp and something resonated inside of me. Was this THE amp for me? I bought a Crush 20 combo amp on the spot and did a gig with it that same night. That was the first time I heard nice things about my guitar playing, especially my guitar tone. “Best you ever sounded!” and “Orange! Wow! Something different for you.” And all I could think in the back of my mind was “This came full circle because of Sabbath.” (Oh and some guitarist Jimmy Page uses Orange too, as well as this guy Geddy Lee…I had to be part of this!)

I reached out to a friend who was a publicist and asked “Who can I talk to at Orange?! This is amazing stuff!” And he put me in touch with the AR rep Alex Auxier. I said something to the effect of “I found my sound finally!” and then when I met Cliff Cooper at NAMM in 2014, the deal was struck. Even if no deal happened, I would still sing Orange’s praises and play their amps.

In my million years of being a guitarist, it took half a million years for “that sound” to find me. And I am glad it did. I have never been happier with an amp as I have been with Orange. Every time I plug into my own rig, or a rig in a music store, I am captivated by how amazing the tones are. Always inspiring and truly blissful.

That’s my personal history of Orange. I admit that I am learning more and more about their history and it’s an amazing journey.