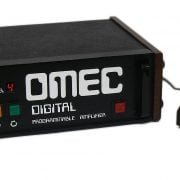 “OMEC stands for Orange Music Electronic Company. We chose the word ‘electronic’ to suggest digital and transistorised amplifiers, as opposed to the valve amps that had established the Orange brand in the early 1970s. OMEC’s main products in the mid-1970s were the programmable digital amp, the Jimmy Bean solid state amp, and – most successful of all – the Jimmy Bean Voice Box. We sold thousands of those.

The OMEC Digital was the world’s first digitally programmable amplifier, which enabled musicians to key in four different, pre-set, instantly recallable sounds. There were seven sound controls that could be programmed into each of the four presets: volume, bass, treble, reverb, sustain, and two specified effects chosen from fuzz and tremolo. The amp’s power rating was 150 watts into 4 ohms. We spent a lot of time and money developing this revolutionary digital amp, and it still really upsets me to recall how we never really got the chance to market it properly. The reason for this was that the bank wouldn’t lend me the capital needed to develop this product in order to make it cost-effective.

Back then, bank managers were very Victorian in attitude and usually wore stiff white collars and dark ties. If you had long hair there was little or no chance of being able to borrow money, and if you looked young you were unlikely to get past your bank manager’s secretary. Before I went to ask my bank for a loan to develop the Digital amplifier’s chip I had a haircut and grew a sort of a beard in order to look older. Needless to say, it proved to be a total waste of time and my application was turned down. Had I been living in America I’m sure things would have been very different. There they judged you on the merits of your business plan – not your appearance.”