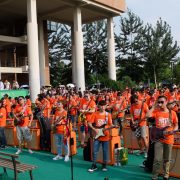 The Rock legend and the god father of Chinese Rock music, Cuijian led the event of the worlds biggest band and created a new Guinness World Record. Orange Amps was honoured to be part of it and witnessed the great moment of this special day.

In the afternoon of June 16th, 1050 students of Beijing Contemporary Music Academy (BJCMA) gathered at BJCMA’s sister school, Art & Culture College of Tianjin University of Sport, and played and sang two rock songs with Cuijian. The event Successfully created the newest Guinness world record for the worlds biggest band. Tina, the official Guinness World Record officer witnessed this feat and issued the certification award to the representative of participants. The old record was created and held by 520 French rock music players in 2006.

The Songs which were chosen were two famous songs from Cuijian: the Rock of the New Long March and never turn back till the end. These two songs truly showed the meaning of the Event, there will always be long way to get to the top of the Rock & Roll world and we will keep on Rock & Roll till the end.

The Event was supported by a charitable organisation, the LIONS CLUB International. The Beijing Branch of LION Club International organised 40 autistic children and their parents to join and sing in this event with 1000 musicians, together to witness this historical moment. The holder of the event, BJCMA aimed to demonstrate that music is the key to building a closer community and music is key to help all the autistic children develop a closer relationship with the world and remind them that they are loved and cared for by others who want them to know they will never be lonely by the name of music.

This event was a historical Rock music party. It showed to the world that Chinese Rock is part of the of the world. Parsons Combo, distributor of Orange amps were honoured to witness this moment.